Are Fireworks Safe For Baby 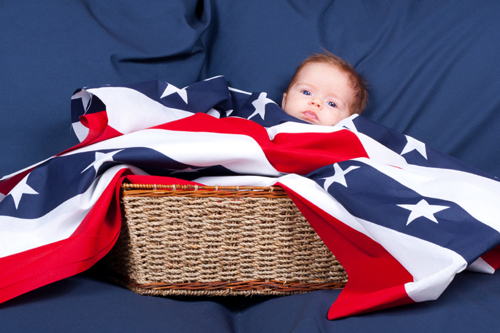 Independence Day is coming, and if you are a new mom you might be contemplating the question of whether or not to go see the fireworks show. Will it hurt the baby’s hearing? Will it scare them? Maybe it's better to stay at home? Before you get all paranoid that taking your baby out to see the show might cause glares of disapproval from busy bodies, let me share with you my own personal story to make you feel better.

I was only 21 when I had my first son. He was born on June 12, which made him a grand total of 3 weeks old for his first 4th of July. I was married to a Marine and we were stationed on an airbase. Naturally the base puts on its own show, and we were delighted that we would just have to go sit out on our lawns to get primo views. I really didn’t think twice about it.

I also didn’t realize that they were going to shoot them off on the airstrip, which was damn near directly behind our houses. It’s probably in reality a little further then that, but when those explosions started going off, I quickly became aware of just how loud fireworks are (something i previously was blissfully unaware of). I felt as if they were exploding inside my son's newborn head. My eyes went wide and I quickly started covering his ears. He was taking it like a champ, sleeping, making only little grimaces every time a big BOOM sounded. I, however, was hysterically trying to muffle his ears in an attempt to not look the overprotective mother in front of our friends. It only lasted about 5 minutes before it all became too much for me, and I quickly swaddled him up and ran inside the house for cover.

When I think back on it, I’m sure we were fine and the fireworks were probably at a safe distance. After all, he simply slept through the whole thing. But I was the one who was the nervous wreck, and what fun is that?

To prevent hysteria, I would suggest definitely going to see a public display, but maybe find a place that is far from the action. A place where you and your baby can watch the pretty light show without it sounding like a war zone. This way you can feel safe in the knowledge that your baby’s precious little ears will be safe and there is no chance that he/she will be traumatized by the loud noises. After all, not all babies are gonna sleep through a war. Thunder has been known to frighten children I would think fireworks could do the same. I would say a good rule of thumb is to go with your gut. Use common sense and everything will be just fine.

« Some Information About Gestational Diabetes

Is it possible to tattoo over stretch marks? »